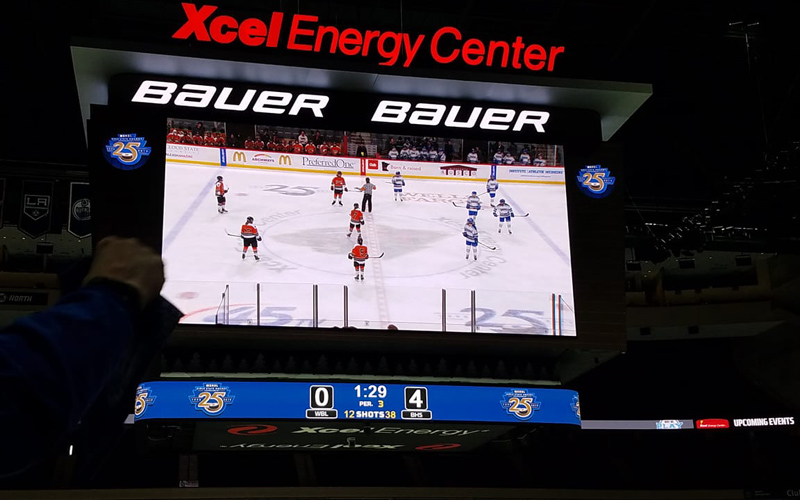 The Brainerd-Little Falls Warrior Girls hit the ice at the XCel Energy Center on Thursday afternoon and peppered one of the best goal tenders in the state, Calla Frank, with 15 shots in the first period. The White Bear Lake girls only made one shot against Olivia King in that first frame and the Warriors scored twice! By the time the game was over the Warrior girls had shut out the Bears 4 to 0 and will advance to play against Andover tomorrow afternoon.

Cheyenne Abear struck first with the programs very first state tournament goal at 5:51 in the first. That goal was followed by Ella Kalusche notching one to bring the score to 2-0 Warriors at the end on the first period. Gabby Smith scored for Brainerd right away in the second period at 1:51 and the Warriors kept the pressure on with dominating offense and a very strong penalty kill. The shots on goal by the end of two periods showed the Warriors ahead in the count 28 to 4.  Emma Booth sealed the win for the Warriors with her goal at 15:31 and the final score was 4 to 0. The Warriors held White Bear Lake to just 12 shot against Olivia King who gains her first win in state tournament play with the shut out. Calla Frank faced 39 shots from the Warriors and gave up 4 for the loss.

The #3 Brainerd-Little Falls & Pierz Warriors face #2 Andover at the “X” on Friday at 6pm. You can hear the game in Brainerd on 1340 KVBR as well as 92.1 WYRQ in Little Falls and on FallsRadio.com. James Hershey will be giving us the play by play on this rematch of the consolation contest from last year. The game will also be available on television at KSTC 45, locally available for free over the air on the KSTP repeater channel 16-2.  Go Warriors!